Making the most of Small Business Saturday 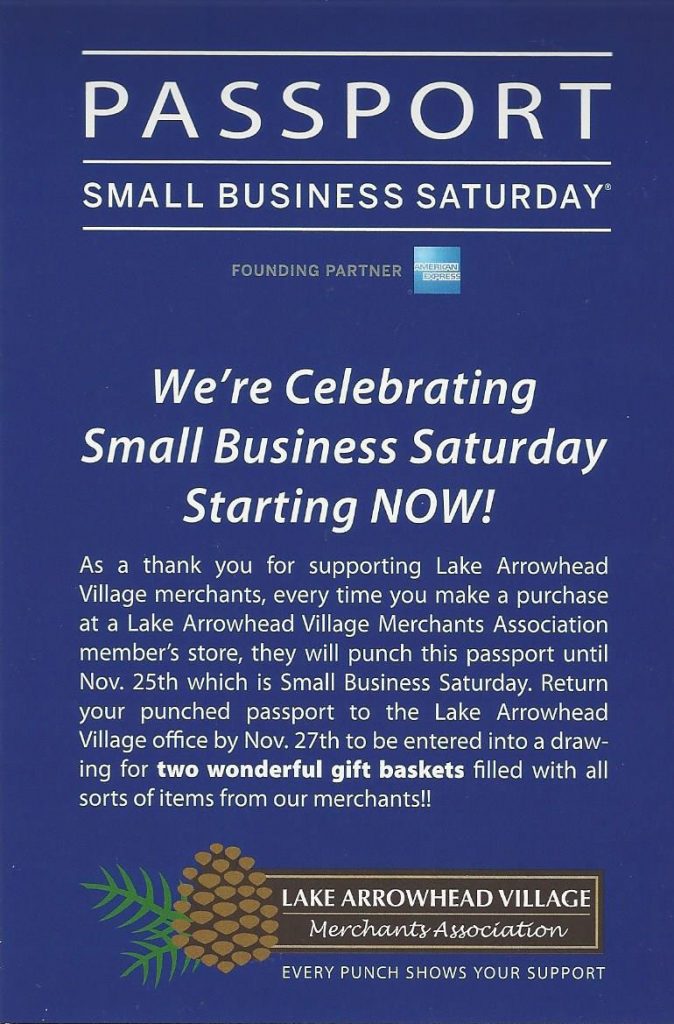 Small Business Saturday started early in Lake Arrowhead, CA this year.  It was a gift to both the merchants of Lake Arrowhead Village and to the community!

In early July the multi-level parking structure for the downtown was shut down for repairs.  Can you imagine losing the bulk of your parking right in the middle of high season?  It was a devastating blow to everyone.  It was thought that the structure would be open by Labor Day Weekend, but that was not to be.

The structure did not re-open until Halloween.

Lake Arrowhead is a Southern California resort destination.  To have this happen in the middle of summer was nearly unthinkable.  The Lake Arrowhead Merchants Association (LAVMA) did what they could – they reimbursed the ticket price for anyone who took the local trolley to the Village, they rented vacant areas in the vicinity for additional parking, but overall, it was a big inconvenience.

Small Business Saturday to the Rescue

Earlier in 2017 I attended Main Street America’s Main Street Now conference with my Tourism Currents business partner Sheila Scarborough.  There I met the Small Business Saturday team and I applied to be a Neighborhood Champion for Lake Arrowhead Village Merchants Association (I handle their marketing).  As the summer wore on, I started speaking with the LAVMA board about how we could incorporate Small Business Saturday early in the Village to get the local traffic back once the parking structure was opened.  I thought I would share what we have done as it is certainly worth your while to become a Neighborhood Champion and “officially” participate in Small Business Saturday.

Our merchants are reporting strong sales for both weekdays and weekends.  The community has been very receptive of the program.  The Passport Program has allowed LAVMA to help the community understand that while they were certainly inconvenienced all summer long, our neighbors and friends who own our small businesses – the ones who support all of our local teams, causes, and organizations – suffered also.  Thanks to becoming a Neighborhood Champion and official partner in Small Business Saturday, LAVMA was able to change the critical narrative regarding the parking structure into more of a positive discussion about the value of our small businesses to our community.

An unexpected byproduct of the Passport Program has been that a few merchants actually became LAVMA members so they could participate in the event.  Yay!

Has your community embraced Small Business Saturday?  If not, you definitely should!