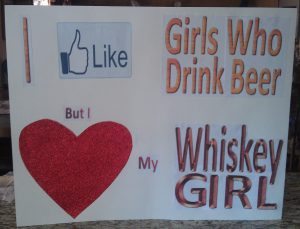 One of the best parts of social media is listening.

BUT, there are plenty of social media participants who aren’t listening.  I had a super experience a couple of weeks ago when someone listened (along with a whole bunch of other people) and it was such a nice surprise.

We had tickets to see Toby Keith at San Manuel Amphitheater in Southern California.  Now I knew Toby was filming a video for his new song at the concert.  It was broadcast that everyone should make a sign.  I made a clever (at least I thought it was clever) sign for my husband to take.  The afternoon of the day of the concert I checked out the Twitter stream for Toby Keith and there was an announcement to tweet a photo of your sign.  So I did.

About an hour later my phone started going crazy as I was getting congratulatory tweets from fans across the county.  Toby’s social media team had seen the photo, they were listening to the social media chatter, and suddenly my seats were upgraded.  Now, HOW COOL is that?!?  We had a great time, loved our seats and loved connecting with so many other Toby Keith fans across the country who had witnessed what transpired.

Are you listening to what’s happening around you via social media?

I’m sure you know you need to, but are you making listening easy on yourself by using Hootsuite or Tweetdeck or any of the other social media listening tools available?  This is something vital that you absolutely must do.

Just think how happy you would make your customers if you responded to what they were saying and doing via social media, just like Toby’s people responded to me.  I know how happy and totally surprised I was that his social media team was listening.  While I already was a big Toby Keith fan, I will always use every opportunity I can to tell others what an awesome experience we had.

What kind of cool social media listening experiences have you had?  Hope you’ll share below!